I am a huge Joker fan. HUGE Joker fan. I only started watching Batman, as a kid, because there was always a promise that I would get to see the Joker. By that standard, I have always been a big Harley Quinn fan. And, hey, who wouldn’t want to dress up as Harley when you’re in love with the Joker. Er, I mean, like the Joker.

And this last year, when Suicide Squad came out, I was so freakin’ excited for the movie, I dressed up in red tights, black skirt, Harley shirt and pigtails to go see it. Unfortunately, I went to a twenty-one and over theatre, and it was little awkward. I was actually worried they weren’t going to let me in because I looked under age.

Anyway, Ill save my thoughts on the actual movie for somewhere else, not on my website.

A month later I decided to fully deck out my costume, to make it a complete Harley Quinn outfit. And, I have to say, the leggings were really easy to make. And a lot cheaper than buying them online. I’ve got a big butt, so finding my size was nearly impossible. And getting the colors to match the dress I had my eyes on was a bit difficult as well.

I took a pair of black leggings I already had, and the red leggings I bought for the movie, cut them in half, and sewed the two ends together. Because the red leggings were made to look like pants, I took off the extra belt loops and pocket, and added them to the black legging once I sewed them together. The diamonds I made by sketching out 1, 2 and 3 inch diamonds on paper for templates, adding a ¼ inch seam and cutting them out on the leftover material, and using iron on interfacing to turn them into patches.

Back
The gloves came from the other half of the pants that I did not need. I measured up to my elbow, sewed down one side to make them fit, and cut thumb holes in the seam near the top of the hem for gloves. It was far easier than buying them online, and hoping the colors matched. 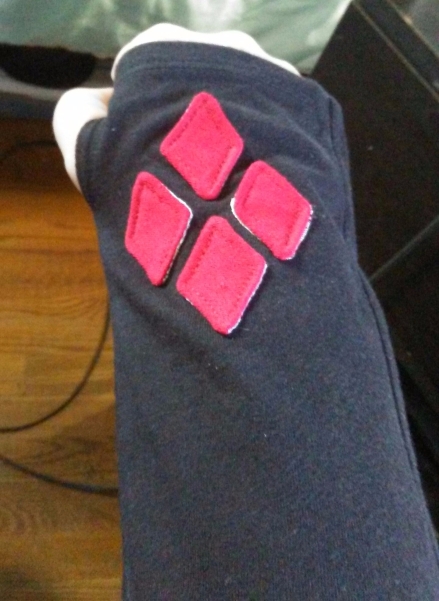 Right
The hairpieces were my favorite to make. I don’t really like dying my hair, so I ordered some cheap colored hair extensions online, and cut them in half, adding the leftover back to the top of the clip of the extension, so I had more hair on the hair piece. After a layer or two of super glue to make sure the hair stayed in place, I took some old ribbon and made bows out of them, gluing them to the top of hair extension. Simple, cute, and original.

The jewelry was made from a few pieces I had laying around my room.

The boots were bought at Walmart, along with the Harley Quinn bows that are on them.

The thick hairbands were from Dollar Tree.

The dress is from Hot Topic.

And the mask was an accessory my mom got from Adore Me.

(The autobiography of a young, self-centered Torbe, struggling through space to be the best doctor in the universe, as told through journal entries. Based on the rpg, “Stars Without Number”.)

I have spent the last three months applying as a physician among this low tech, perpetulant place of a planet, Belate, dragging from city to city in what they consider “high class” carriers, and staying in “five star” residencies, within the “upper class” part of town. I swear by the all holy prophet Tiberius himself, if I spend another moment in this forsaken Badland under belly, I will begin to lose I.Q. points.

I took a job as an “assistant” to a local physician, and he gave me a crude knife to to amputate an arm infested with Gangreblu! A knife, for Crohn’s sake! (What? Just because I don’t believe Dr. Tiberius was a prophet, doesn’t mean I cannot use his name in vain, if I choose to.) I can guarantee that patient would have preferred to be swallowed whole by the parasite counterpart to the Terran’s infamous “Gangrenous necrosis”, than suffer through the pain and agony that would ensue from the infections a crude knife would have given him, and eventually die of Gangreblu anyway!

Then, that foctling doctor fired me when I incinerated it! Oh, the science of the matter! I swear, I will get off this forsaken planet if it is the last breath this Torbe breathes.

The blood was smeared across the tiles in a raged mess.

The smeared mess glistened from the dim, florescent light.

I walked over to the sink to wash my hands, feeling the sick nausea sweeping over my body once again. Scrubbing them clean from the grime that was about to dirty them, I listened and waited as the last stall door creaked.

I could see him in the mirror as his body came into view. The grin in his eyes was red.

“Sophia.” Chilling, icy, he pressed his black soul to my back each and every moment he locked eyes with me.

“You made it just in time.”

I spoke no words in response. I just washed my hands, scrubbing them.

In his reflection, dark, soaked clothing sloshed silently from his slight movements.

“Get me my clothes,” he demanded, softly, but his eyes looked down and the tall man pulled slightly at his cuff-links.

The duffel bag slid from my shoulders and fell to the floor when I dried my hands. Kneeling, I unzipped the sports bag that held items belonging to no sport in particular, and pulled from the large case, a set of neatly folded, top of the line name brand threads.

Ripping the clothes from my palms, he changed. The dirty ones dropped to the water tracks on the tiled floor.

Picking them up, they were folded neatly and placed back into the open duffel, non-sports bag.

He stepped closer, looking down upon my form. “Sophia.” I knew what came next.

At least, I thought I did. This time, this one time, he paused. Placing a hand to my cheek, he tilted my chin up. “You don’t look good,” Gabe almost sounded concerned.

On command, I stood. He pressed his mouth against mine so I could taste the blood of his victims. I did not like the blood. I did not want the blood.

He had saved it just for me. I swallowed the blood and turned my head away, to wipe was left from my lips with the sleep of my coat.

When he pulled away, he ordered me once more, “Clean this mess up.”

There was no nod, nor verbal acknowledgement that I understood him, as I knelt back down in front of the duffel and removed rolls of towels, disinfectant and trash bags to do as he had asked.

When I rose to my feet again, he was gone. Either back to the manor, or to continue his pursuit of the older female students, I never knew which.

I made my way to the back of the stalls, eventually, counting the seconds I was in the bathroom while I scrubbed the blood away. More than fifteen minutes, and the teacher would send another student in to make sure I was not skipping. That I had learned from experience.

The was no body at the end of the blood trail. There never was. Gabe never uttered a word of his victims, and I never asked.

I would see one or two roaming the hall a few days later, dazed and oblivious to where they received the bite marks that hid under the small bandages they wore. I never knew them before the feeding and I would never forget them after the mess. I was sure Gabe planned his attacks around strangers in the school, so as to not distract me from my studies.

It was not like I really had any friends for him to target to begin with.

The soaked towels went into the trash bag, the trash bag into my duffel, and my duffel over my shoulders as I went back to the sink to scrub my hands again. I had to be careful, blood had a tendency to stain.

Then, I left the bathroom to head back to class, before my fifteen minutes were up.